Cloud Wedge - geek of the week 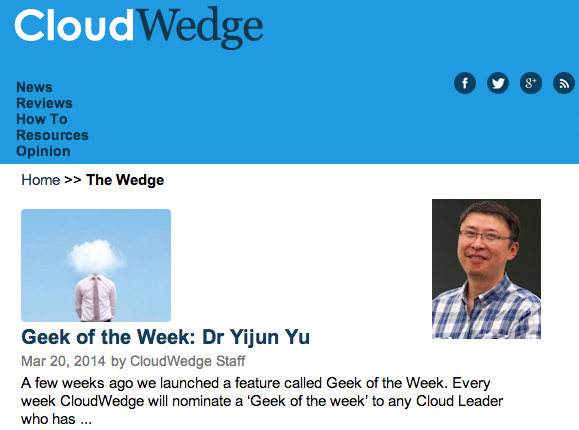 CloudWedge: 'Geek of the Week'

My colleague Yijun Yu recently wrote a opinion piece for The Conversation about how cloud computing could have made a difference to the search for Malayian Airlines MH370.  Essentially the question he poses is: why, in the age of global internet connectivity (including now onboard planes!), do we depend on the onboard flight data recorder for information about what happens on a plane?

Of course there are numerous challenges with this - not least the cost of bandwidth for all the flight data (including cockpit audio) to be uploaded in real time and the security of the data.  Yijun's article addresses some aspects of the latter, and the former is not an insurmountable problem.  For example it should be possible to upload basic flight telemetry (e.g., GPS location, air speed, engine statistics and fuel data) without requiring significant bandwidth.  Indeed aero engine manufacturers such as Rolls-Royce deployed engine monitoring systems with the capability of sending mid-flight data to the company some time ago.  Now imagine a cloud computing platform that allowed the data from the in-flight telemetry system to be integrated with the data from all the systems that interact with an aircraft throughout it's lifetime - from the maintenance and service records systems on the ground, to the air traffic control systems that register the passage of the flight.  If this included the radio interactions with air traffic controllers, it would be possible to get a much clearer and quicker picture of what is happening to a plane that is in difficulty - well before the flight data recorder is found.

As a result of his article, Yijun was recognised by CloudWedge as their 'Geek of the Week', a well deserved accolade for some insightful ideas of how cloud computing could revolutionise aviation safety.
fun research security

“When will I be done?” - in a busy working life, with lots of tasks demanding our time, this is a question arises from time to time.  In the break from work at the end of another year, I am reminded to reflect on the things that I have done and a particular conversation with a group of friends where we discussed what “being done” means to us. The discussion explored the role of different goals in our lives and what we each defined as the point of having freedom from obligations to do what we want. Some of the common themes related to the independence of our children and retirement from work. I also noted a sense that all of us felt that we were really busy right now, and there were plenty of things on the horizon that would also need our attention in the next month or so, but ‘things would get better after that’. This is a recurring theme I have observed both within myself and among colleagues and from other academics who share experiences online. Of course the reality of our situati
Read more